Activation of latent TGF-β by the αvβ6 integrin is a critical step in the development of acute lung injury. However, the mechanism by which αvβ6-mediated TGF-β activation is regulated has not been identified. We show that thrombin, and other agonists of protease-activated receptor 1 (PAR1), activate TGF-β in an αvβ6 integrin–specific manner. This effect is PAR1 specific and is mediated by RhoA and Rho kinase. Intratracheal instillation of the PAR1-specific peptide TFLLRN increases lung edema during high-tidal-volume ventilation, and this effect is completely inhibited by a blocking antibody against the αvβ6 integrin. Instillation of TFLLRN during high-tidal-volume ventilation is associated with increased pulmonary TGF-β activation; however, this is not observed in Itgb6–/– mice. Furthermore, Itgb6–/– mice are also protected from ventilator-induced lung edema. We also demonstrate that pulmonary edema and TGF-β activity are similarly reduced in Par1–/– mice following bleomycin-induced lung injury. These results suggest that PAR1-mediated enhancement of αvβ6-dependent TGF-β activation could be one mechanism by which activation of the coagulation cascade contributes to the development of acute lung injury, and they identify PAR1 and the αvβ6 integrin as potential therapeutic targets in this condition. 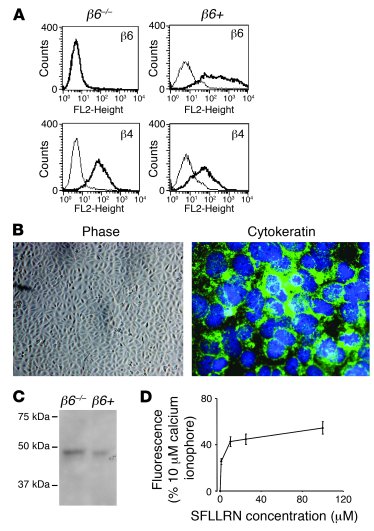 () β6 and β4 integrin subunit cell surface expression on Immortomouse cells was analyzed before (β) and after (β) infection with a retroviral vector encoding human WT β6. () Epithelial cell morphology was observed by phase-contrast light microscopy (×100), and expression of the epithelial marker cytokeratin was determined by immunofluorescence using a FITC-labeled primary antibody (×600). () Presence of the PAR1 receptor in IMLE cells was analyzed by Western blotting of cell lysates using a specific anti-PAR1 antibody. () To determine whether the PAR1 in these cells was functional, cell suspensions were treated with increasing doses of the PAR1-activating peptide SFLLRN, and increasing calcium mobilization was determined as a percentage of the positive control, 10 μM calcium ionophore.