The congenital long QT syndrome is a rare disorder in which mutation carriers are at risk for polymorphic ventricular tachycardia and/or sudden cardiac death. Discovery and analysis of gene mutations associated with variants of this disorder have provided novel insight into mechanisms of cardiac arrhythmia and have raised the possibility of mutation-specific therapeutic intervention. 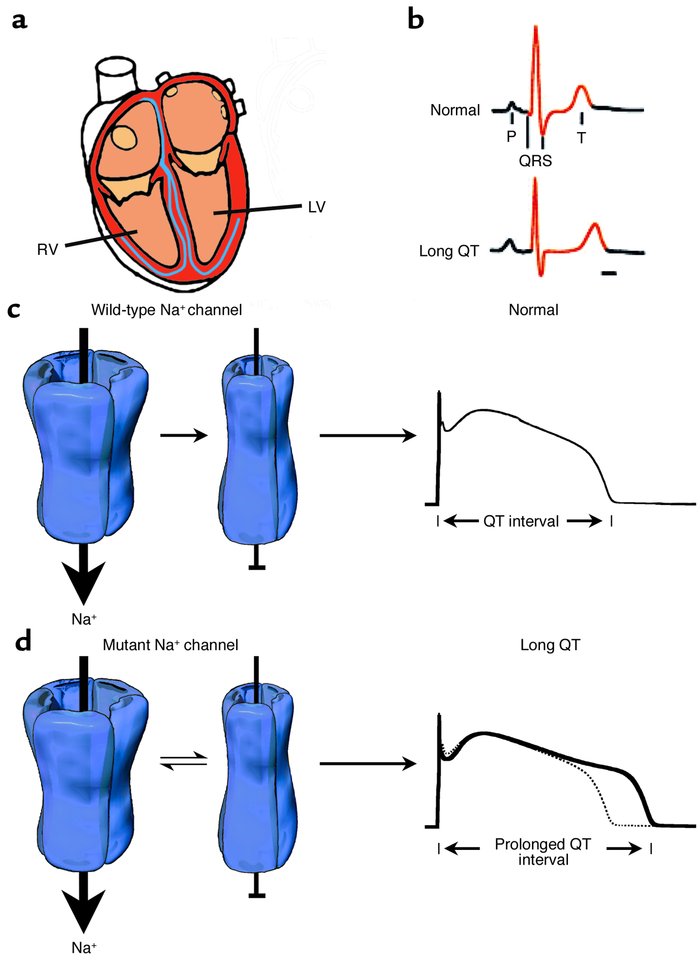 Mutation-altered Na+ channel inactivation underlies the LQT-3 phenotype. () Schematic view of the human heart emphasizing right ventricle (RV) and left ventricle (LV), which contain the substrates for altered electrical signaling in LQTS. () The clinical phenotype of LQTS is a prolonged QT interval of the ECG. () Gating of normal (wild-type) human heart Na+ channels during the action potential plateau. Channels rapidly enter an absorbing inactivated state from which they rarely reopen, and thus the QT interval (far right) is not greatly affected by wild-type Na+ channels. () Na+ channel gating in most forms of LQT-3 syndrome is altered. During the plateau phase, channels enter a mode of gating in which inactivation is no longer an absorbing state. A small fraction of channels open, enter a nonconducting inactivated state, and then transition back and forth between open and nonconducting states for the duration of the action potential plateau. This produces a small depolarizing current that prolongs the QT interval of the ECG of mutation carriers (far right). Modified with permission from refs. and .